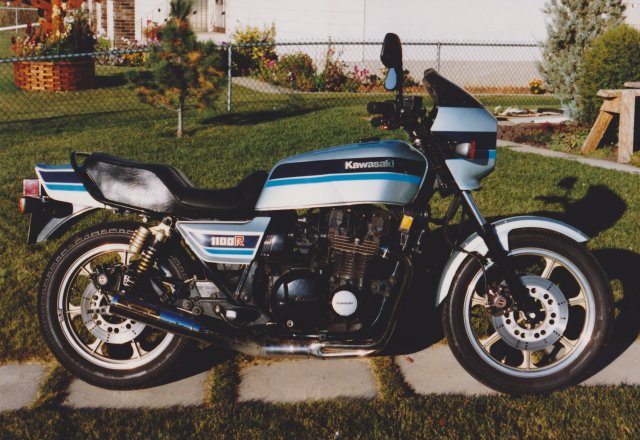 There is an interesting story about how I acquired this bike.

the end of the row of used motorcycles caught my eye.  I went down to check it

just traded it in on a nice, new GSX 750.  A few more questions and I realized

that they did not have any idea what it really was.  I left with the image of

that silver/blue bike in my mind.  Went back on the weekend and looked it over

again.  I appeared to be in good shape, but then I noticed a gas tank leak along

Hmmm. . . I started to formulate a plan. 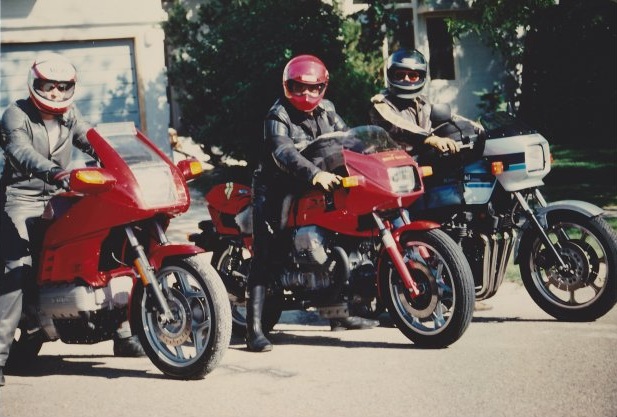 1989, three of us off to the Vintage Motorcycle Races at the old 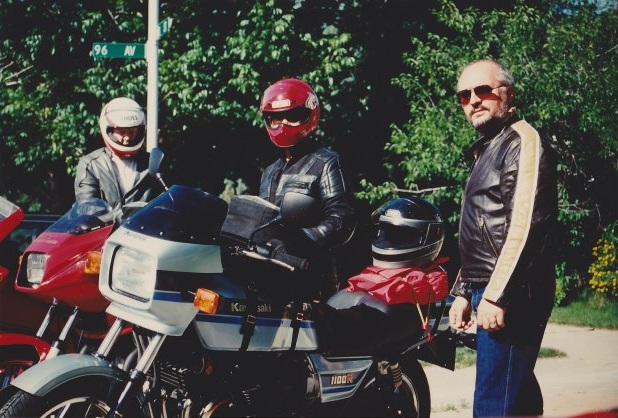 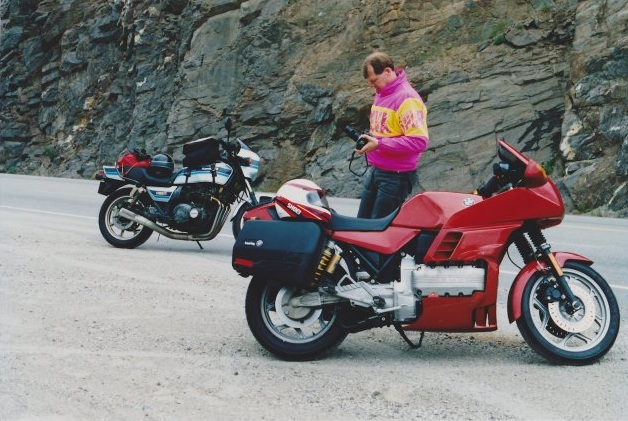 1989 trip, stopped on the way through the Rockies. 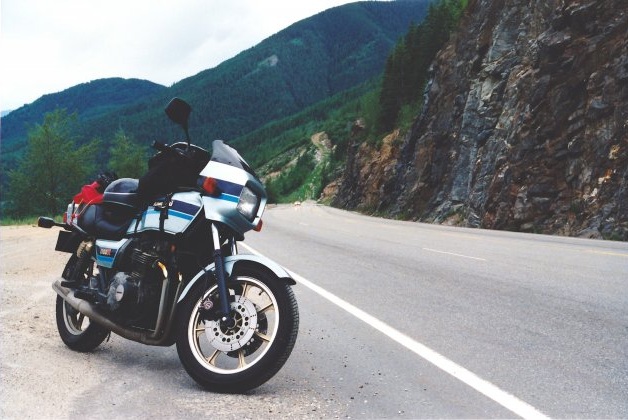 KZ1100R on Highway 11 on the way to the Icefields Parkway.
Part one of the plan - protecting the target.
I cornered the salesman and pointed out the leak and told him that it was

obviously a fire hazard out there on the showroom floor.  I actually helped him

move it back into the shop, where it was now safely out of the public eye.  I was

probably the only one who knew it was there.

Part two of the plan – scoping out the solution.
I checked with my local Kawasaki dealer and asked about a replacement tank for a

KZ1100R on the off chance that there might be one available, somewhere.  A few

days later he called to say that he’d found a brand new one, in Toronto, and the

was inquiring about that tank.  I confessed up to my Kawasaki dealer about what I

had found and my plan.  He told me that there were only two KZ1100Rs shipped to 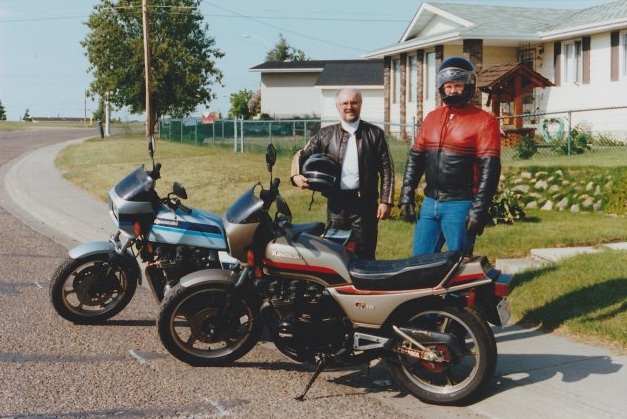 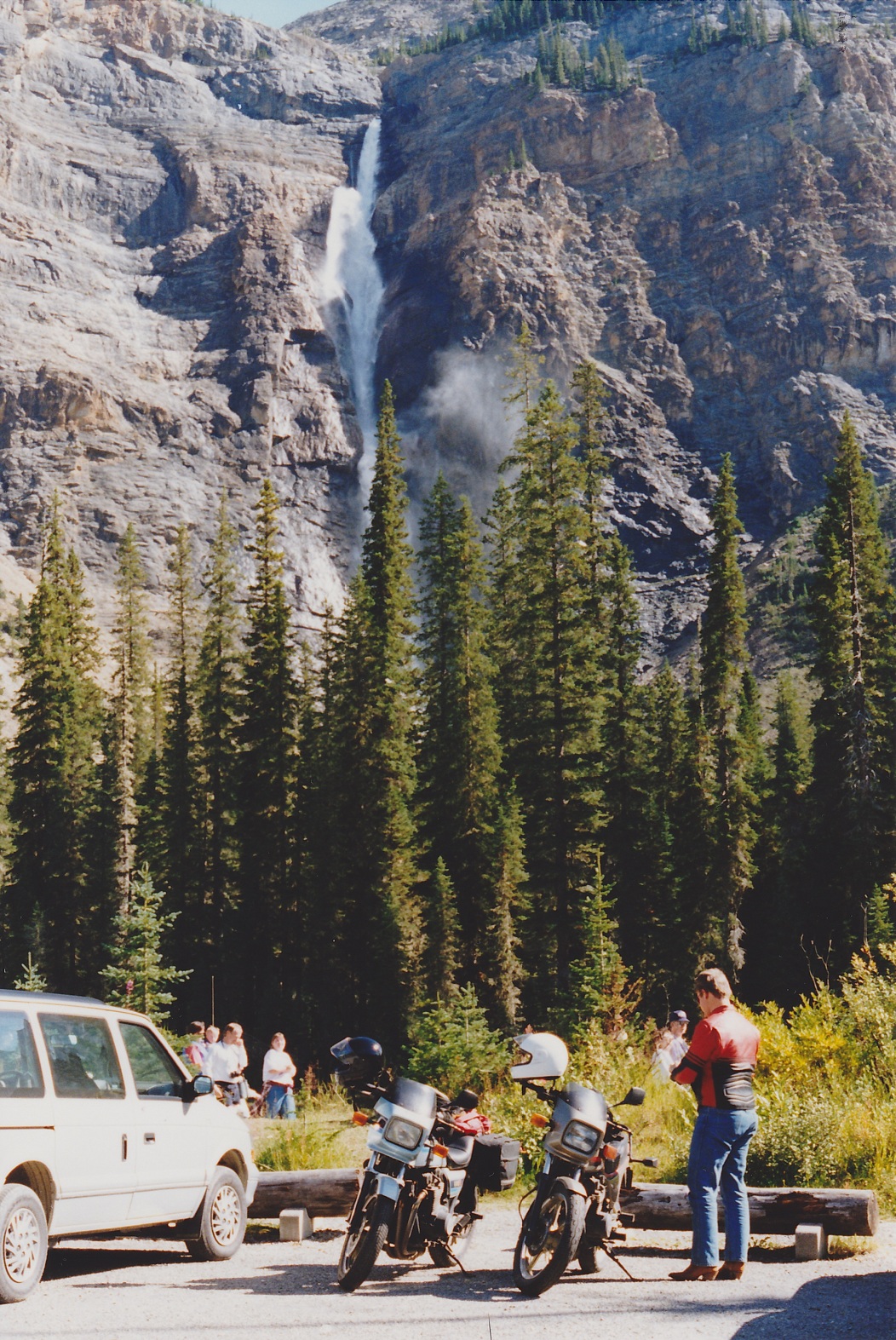 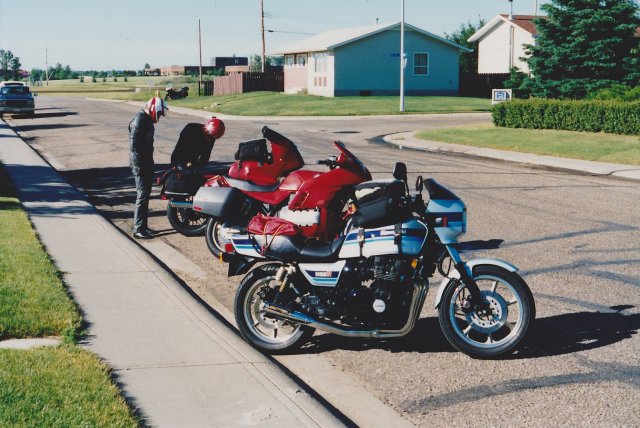 1989 trip again, packing gear into the Moto Guzzi.  A week’s worth of

gear in my tankbag and my raingear strapped to the seat. 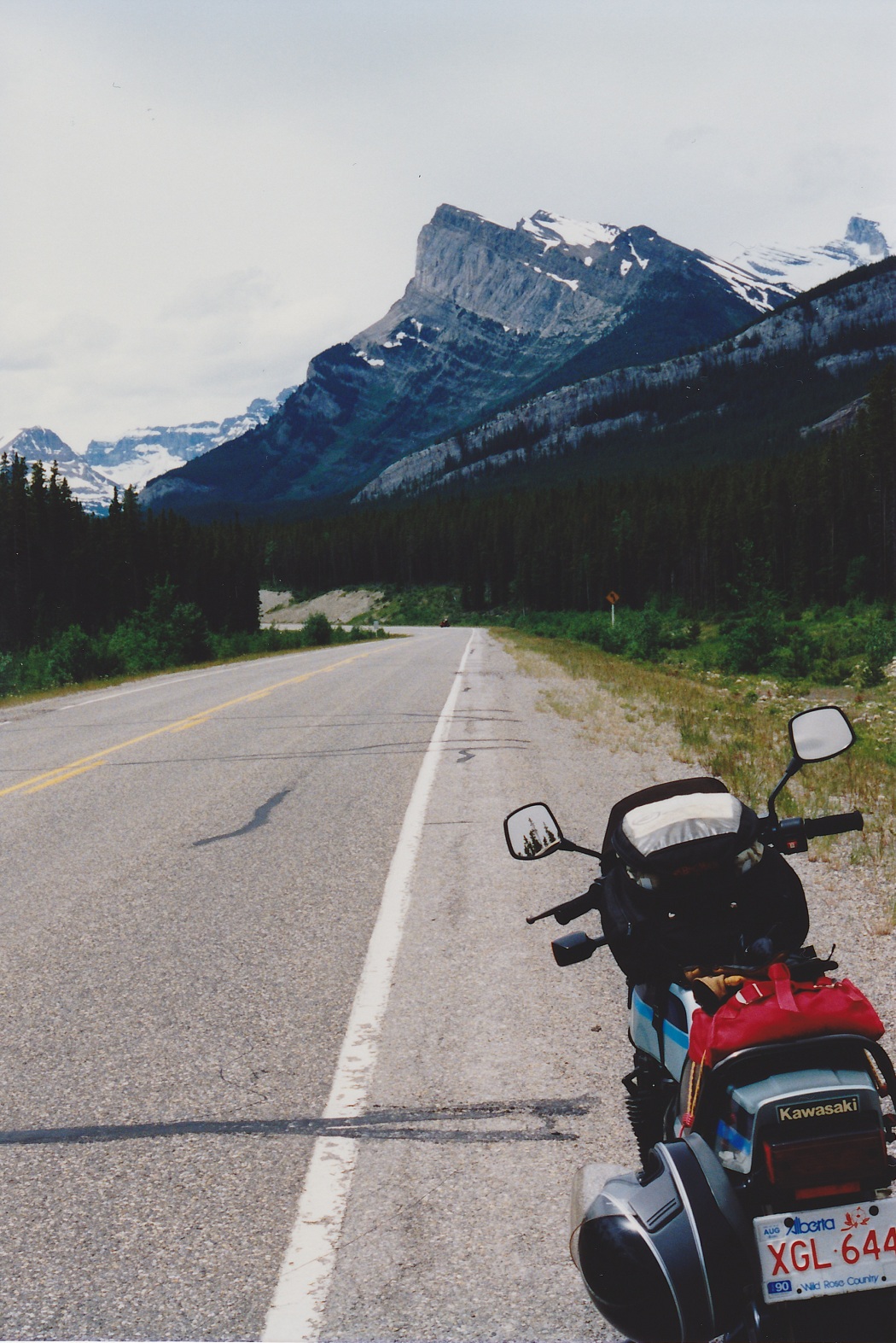 the tank was the only issue I could see with it.  Told them I was interested in

Part four of the plan – closing the deal.
My Kawasaki guy said the tank was still available, so back to the Suzuki dealer

tank issue and the BIG problems in finding a replacement).  They thought about it

for about 2 minutes and accepted my offer.  Phoned my Kawasaki guy and ordered

the tank!  Picked up the bike a couple of days later, rode it home with the

dripping tank and parked it until the next week when the new tank showed up.

Popped the replacement tank on it and all was good! 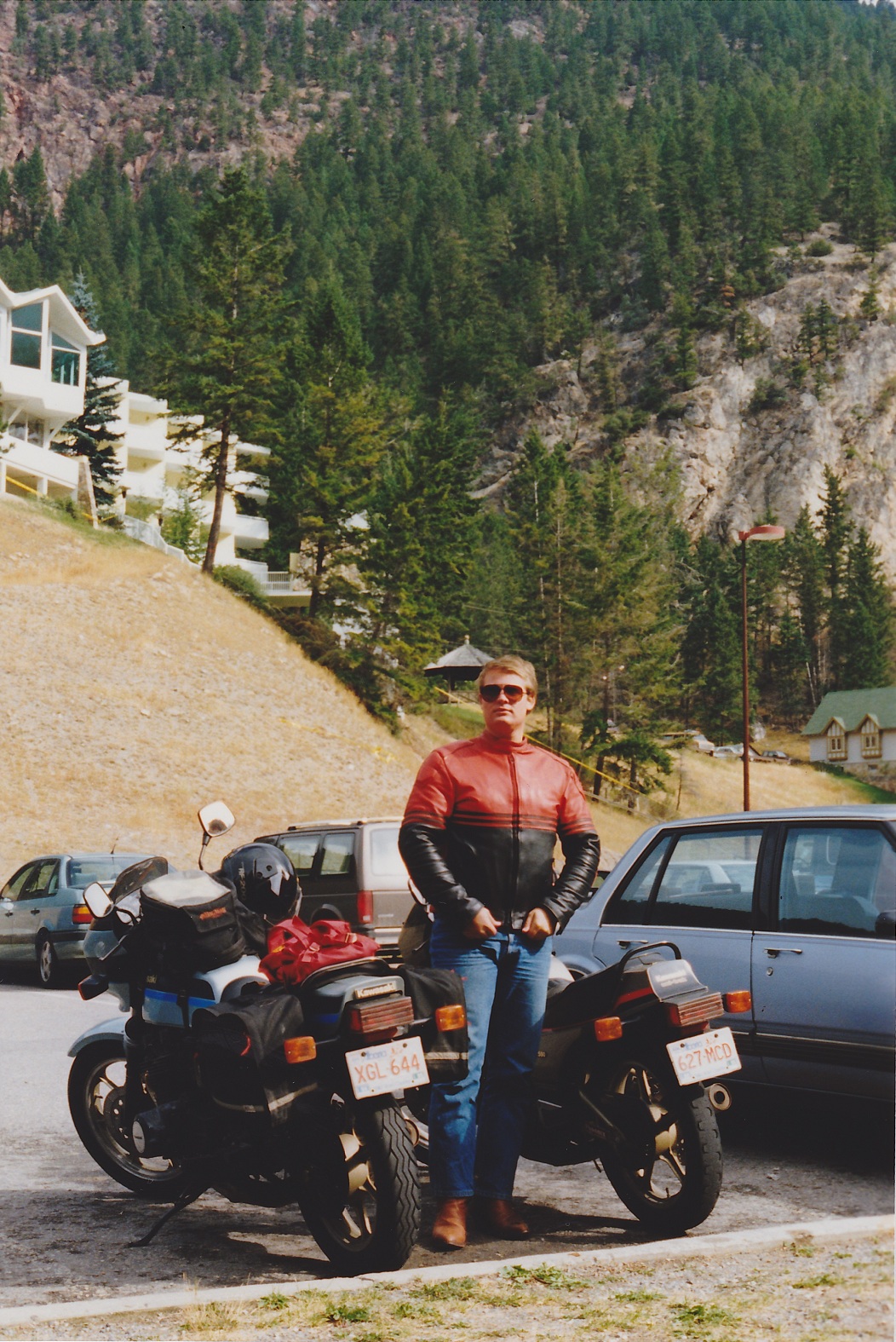 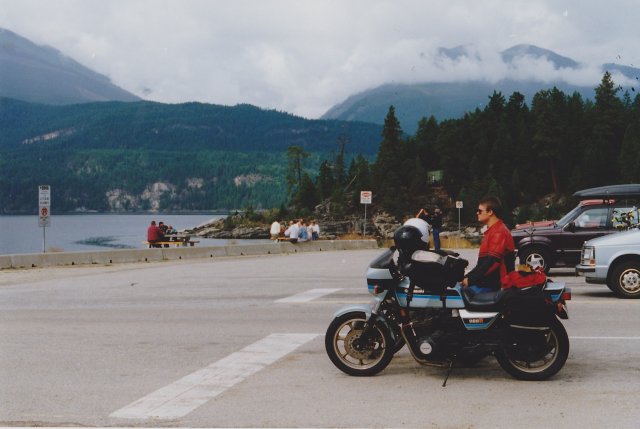 1992 trip, waiting for the Kootenay Bay ferry, after having ridden the 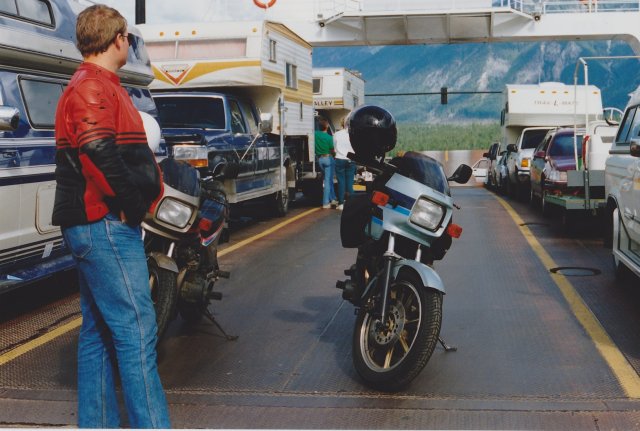 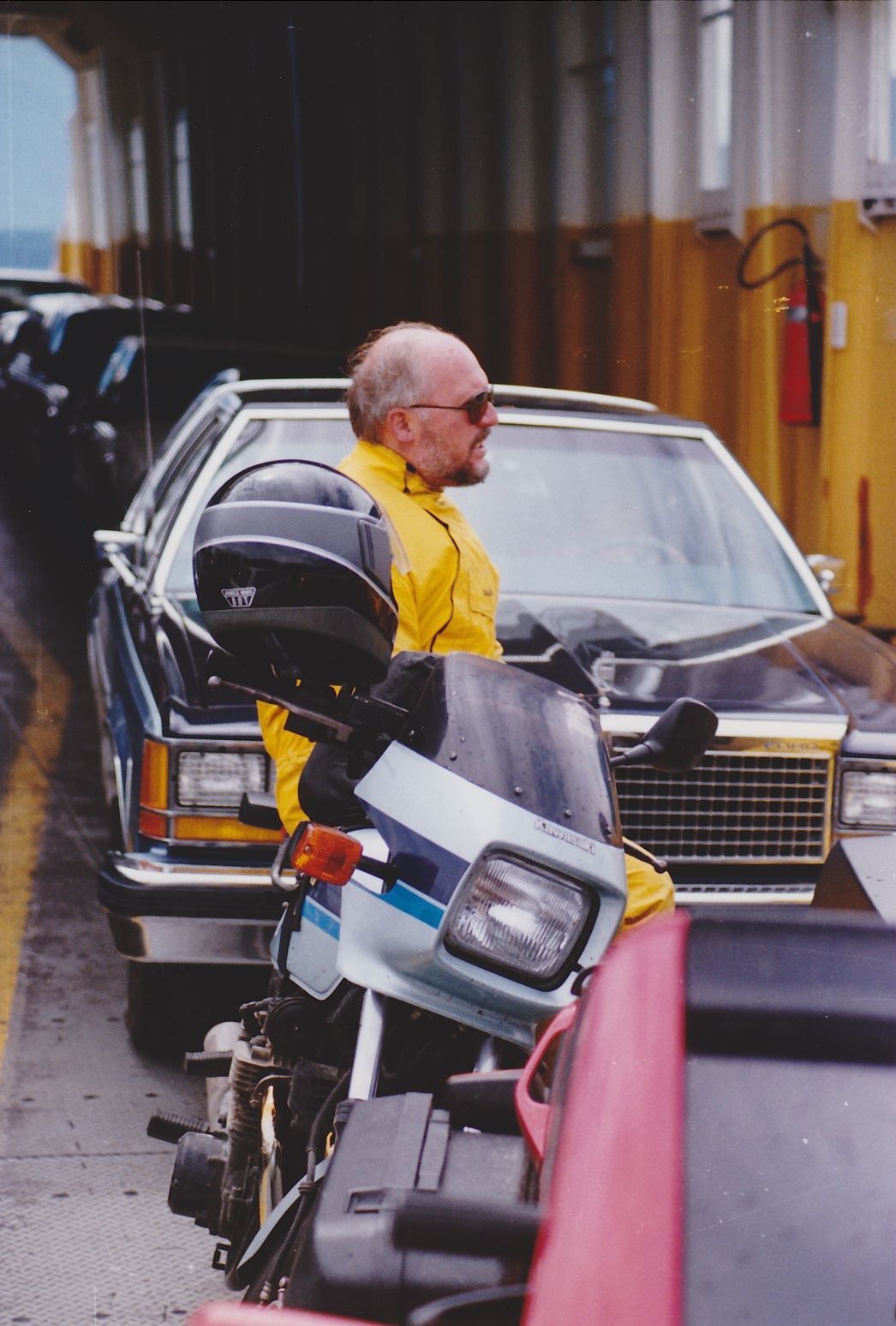 1989 trip, on the Galina Bay ferry on the way to Revelstoke, BC. 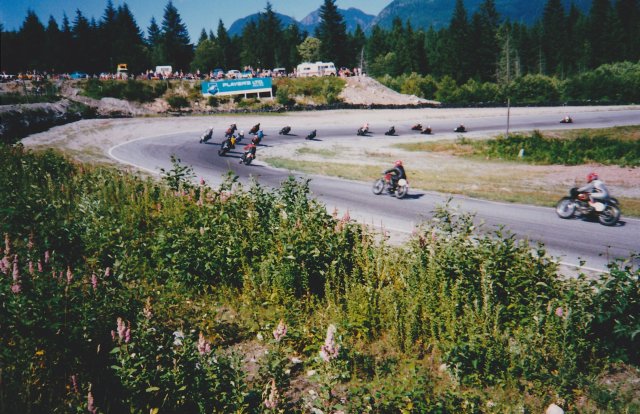 is now a subdivision.

that is on it now, along with a K&N; filter and a jet kit.  Later replaced the

a somewhat futile attempt to harness the high speed handling wobble.  The brace

with from the factory.

It has been used to commute to work, local trips to the mountains and ridden to

held at the old Westwood Raceway in Mission, BC in 1989.  The Deer’s leap crest

on that track was something to behold, but it’s now a subdivision.  One of our

pasture, and the rider was there for the inaugural public ride.  Leather helmet,

goggles and a cloud of smoke could not hide the owner’s ear to ear grin.  Another

suspension and frame geometry.  The REX has been modded a fair amount (Akrapovic

seat, upgraded lighting harness and tip over kill switch) and it gets the

majority of the seat time now.  The GPz550 is currently down awaiting time for

and the ZRX1200R are noticeably different, I often get questions or confused

looks when I show up with the either of them.   They either confuse one with the

other, don’t believe the REX is relatively new, or that the KZ1100R is that old.