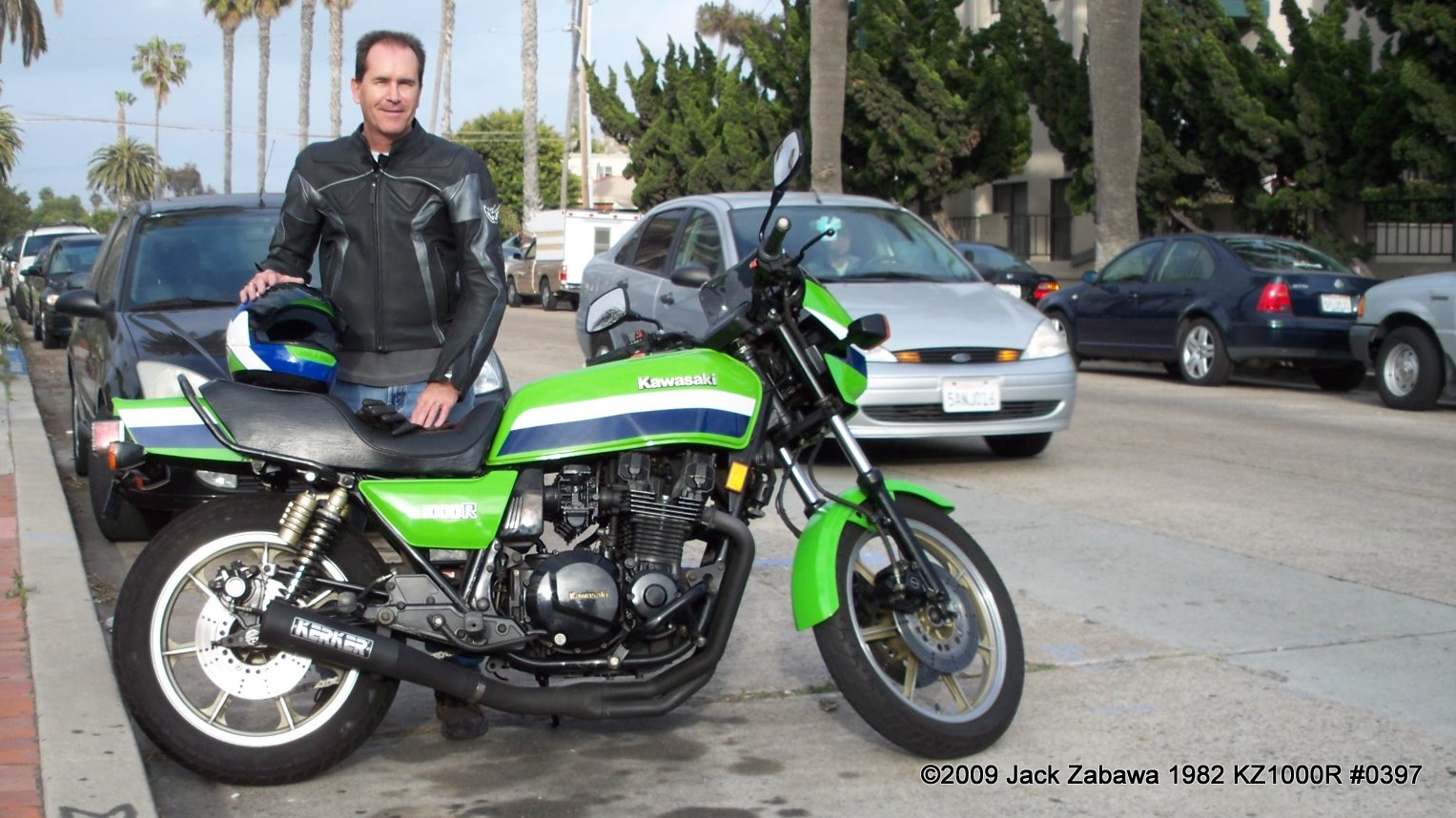 California.  You might already know Jack.  He maintained the Original Jason Van Slyke ELR Registry from

There are not a lot of details about my ELR, after 27 years it’s clean and all stock.

Some of the black paint needs a bit of detailing.  The rear shocks are old,

It's ready for another easy San Diego summer.

In 1982 I was junior enlisted aircrewman in the US Navy. I was routinely speeding around the canyons and

hills east of San Diego on my 1981 GPZ550.  While getting a new tire and hanging out at Sea Weed Kawasaki

in Imperial Beach, I browsed the marketing brochure for the 1982 Eddie Lawson Replica.  I had read about

Eddie in Cycle magazines, I have never actually met him.  I just knew Kawasaki was winning races. I asked

Earl Roloff Sr. about the 1000R.  They wouldn’t be selling one, they already had a plan to race theirs.

Although the Roloffs were good friends I wanted an Eddie Lawson Replica.  I put down $800 dollars of

Four weeks later it arrived at the dealer.  I paid $4500 dollars total tax and license fees. I was out the door

Later in April I took a couple weeks off to ride home to Omaha, Nebraska.  It was a great trip, and fun to

be riding around my home town with my old High School buddies.   On Memorial week end I headed back

to San Diego.  I got a $113.00 speeding ticket in Plattsmouth Nebraska and another just a bit later in Colorado.

I made it home just fine.  Stored the Green Machine bike and went to sea with the US Navy.

While out at sea I collected all the magazines.  Later that year, once home, I enjoyed my free time cruising

with my girl friend on back and zooming around with my Navy friends, proud on my Green Machine.

Things were changing, I got married, I knew this bike would be a keeper.   I put a cover on the Green Machine

A year or so later I finally bought a Suzuki Samari, I sold the GPz but hung on to the Green Machine.

of racing and his time with Kawasaki.  This green machine is part of my history, my memories of riding around

Since then… divorced, retired, re-married.

The Green Machine has been stored, garaged and under a cover most of every year.

Every summer I like to roll it out , shine it up and cruise around in the warm San Diego sunshine.

There are always a few bikers who give a quick wave.

To nominate or submit your own bike for  "Bike of The Month."
Send some info on yourself your bike and loads of pic's bigger the better.

E-mail me at:  This email address is being protected from spambots. You need JavaScript enabled to view it.