about I made up as I went along!

Things that inspired me were Lime Green ELR’s, My own Lime Green, Purple & White ZX7R P2,

the engine in my own GPz1100A2, & building something using all the knowledge I’d gathered

whilst building my modified Z1000A2. That’s what this bike is, the sum of all of the above.

as the side stand mount had been torn off, a replacement frame was deemed an easier option,

while sourcing that I had three donor engines to choose from.

I took the best parts from two of them;

a real bonus was discovering one of them was fitted with an almost new Wiseco 1170 kit.

Front forks were always going to be USD’s.

I had two pairs of ZX9R forks stashed & a set of Hayabusa as well.

Initially I started the build with the Busa forks, as they were in excellent condition,

but found it was going to be very difficult to mount a conventional mudguard,

so they were swapped for a pair of late ZX9R forks,

that would take the six pot’s that I had already invested a lot of time & money in.

This proved to be the most expensive option; I bought new chrome stations,

had the ‘feet’ powdercoated & the upper aluminium outers, polished then anodised black.

Back end initially started with a braced TL1000 swinging arm,

By this time I had sourced another frame with ‘documents’, so I removed the pressed steel footrest hangers,

then turned & threaded some boss’s to mount the rearsets.

I inserted these into the rear frame rails (behind the engine),

& sent the whole lot off to be welded & powdercoated, 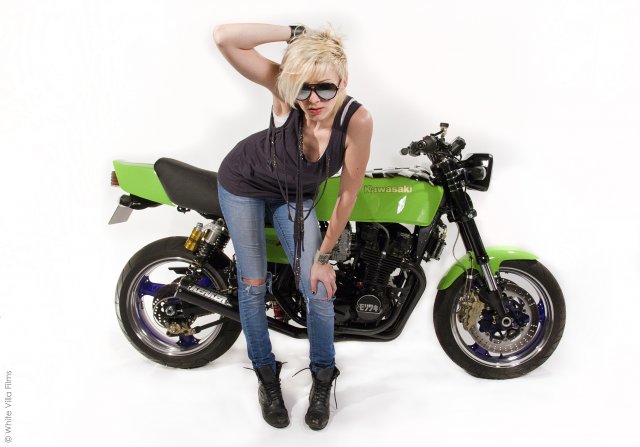 had been marked as exported & they couldn’t issue any registration documents.

been started. So then I had to source frame No.3 & start the preparation all over again.

Engine work all went fairly well, although I had to fit some ‘bigserts’ into the head,

as nearly all the cam cap threads had been stripped, repaired, then stripped again.

The only other problem to note was that the head/barrels leaked like a sieve,

so that all had to come apart again, the problem being traced to the too locating dowels being

too long, as both the block & head have been skimmed.

Paintwork is a story all in its self.

The only thing I was sure about was that it was going to be mainly Lime Green.

I had wanted to include purple & white, but after some thought I decided to leave purple out

of the paint equation, as I already had it included in the wheels, so that just left white to get

into the design, that’s where the chequered flag came from, not 100% original I know,

but it works well & I did scour several painters websites looking for something ‘realistic’.

Fortunately for me I found a good painter only a couple of miles from home.

Working with him was a joy, I found he would listen to what I wanted,

bouncing some good ideas around. For example,

I wanted the side panels to have a Kawasaki font used,

but not the original eighties style,

so I opted to use the same style as a ZZR1100, but adding a larger GSXR or Honda ‘Type’ R

after the figures, well my painter came up with the idea of using the ‘R’ from the graffiti style

Electrics have all been heavily modified; Loom is a Modified Unitrak item,

with all redundant wires being stripped out.

There is no longer a traditional key; instead I have fitted a RFID keyless ignition

that just requires you to pass a fob over a sensor. Ignition is standard Kawasaki,

but with Dyna coils & leads.

LED indicators have also been fitted.

Induction is by a set of Mikuni RS 38mm Flatslides, with individual K&N;’s,

Exhaust is a ‘MAC’ header/collector, with a one off link pipe,

that have been ceramically coated, the end can is a very modified Kerker ‘K’ can,

that now has a ‘very big bore’.