Our featured bike is owned by Tony Pearson, who writes the "Fix it Again, Tony" technical Q & A

with just 3,500 miles on the odometer, which he purchased in 1997, just as they started becoming

good ones went to Japan in the 80s, nice ones are destined be worth their weight in gold.

Here are some photos of the bike and a little story of how I came about owning it.

Your site looks great and thank you for taking the time to keep it going. 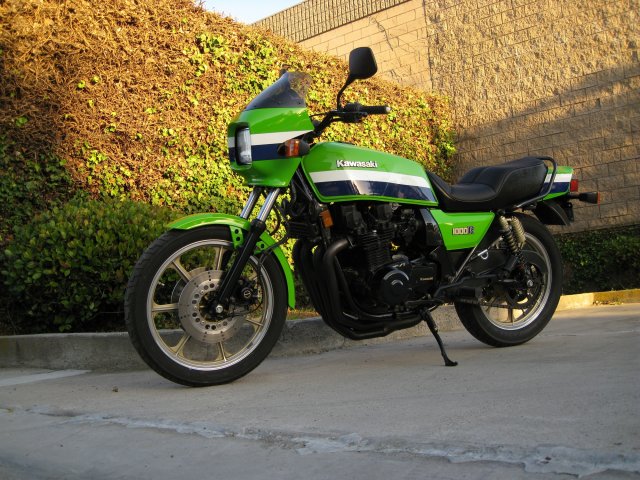 In 1982 I saw my first ELR at Champion Cycles in Southern California.

That was twice as much as I paid for the Z1-R four years earlier.

The price was so cheap I figured it was gone before the ad came out.

About a month later I was talking with a friend and told him about the bike.

I told him where the bike was located, (Detroit), and that it was probably gone.

He told me he thought he knew the seller and called him right there.

It was him and shockingly, he still had the bike! We made a deal on the phone and

two weeks later it was delivered to my house.

In 1982 the seller lived in Los Angeles and bought the bike.

Six months later he was transferred to Detroit and the bike went with him.

This meant his riding season was only a few months a year.

The bike had just over 3,200 miles and was completely original down to the Dunlop K300s.

I couldn't have found a better example if I tried.

It's number 12 which is the exact opposite of Eddie's number.

I rebuilt the leaking front forks and put on new tires and it's been very reliable.

It currently has just over 3,900 miles and recently I had Eddie sign the tail section.

I currently have 15 bikes and this is one of my favorites.

and when you push it in the corners,

feels like there's a u-joint between the seat and gas tank.

I write a column in Hemmings Sport & Exotic Car magazine where the bike has been featured.
http://www.hemmings.com
When it comes time to thin the herd, I'm going to have a hard time selling this one.